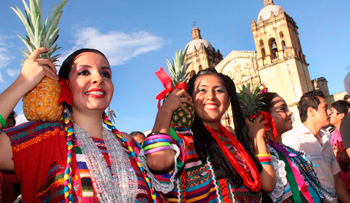 The state of Oaxaca (wah-hah-kah) has a special magic felt by Mexicans and foreigners alike. A redoubt of indigenous culture, it’s home to the country’s most vibrant crafts and art scene, some outstandingly colorful and extroverted festivities, a uniquely savory cuisine and varied natural riches. At the center of the state in every way stands beautiful, colonial Oaxaca City, an elegant and fascinating cultural hub. Nearby, the forested Sierra Norte is home to successful community-tourism ventures enabling visitors to hike, bike and ride horses amid delicious green landscapes. To the south, across rugged, remote mountains, is Oaxaca’s fabulous coast, with its endless sandy beaches, pumping Pacific surf, seas full of dolphins, turtles and fish, and a string of beach towns and villages that will make any traveler happy: lively Puerto Escondido; planned but relaxed Bahías de Huatulco; and the mellow delights of Zipolite and Mazunte. 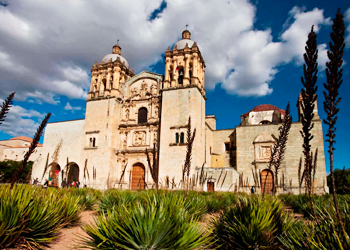 Traffic-free, shaded by tall trees and surrounded by elegant portales (arcades), the Zócalo is the perfect place to start soaking up the Oaxaca atmosphere. It bustles with life by day and night, as marimba ensembles, brass bands and roving buskers float their melodies among the crowds, hawkers try to offload pretty carpets and hideous balloons, and lovers parade in slow rounds under the trees, while anyone and everyone sits, drinks and watches from the sidewalk cafes. The adjoining Alameda plaza, also traffic-free but without the cafes, is ripe for people-watching with its trinket-toting vendors, gawking tourists and informal clothes market. 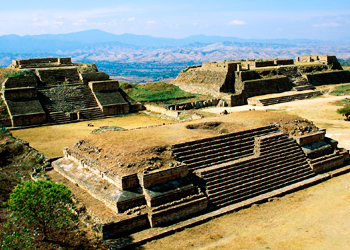 Is a large pre-Columbian archaeological site in the Santa Cruz Xoxocotlán, located approximately 9 km (6 mi) west of Oaxaca Capital.
Besides being one of the earliest cities of Mesoamerica, Monte Albán’s importance stems also from its role as the pre-eminent Zapotec socio-political and economic center for close to a thousand years. Founded toward the end of the Middle Formative period at around 500 BC, by the Terminal Formative (ca.100 BC-AD 200) Monte Albán had become the capital of a large-scale expansionist polity that dominated much of the Oaxacan highlands and interacted with other Mesoamerican regional states such as Teotihuacan. 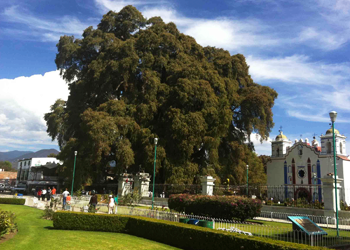 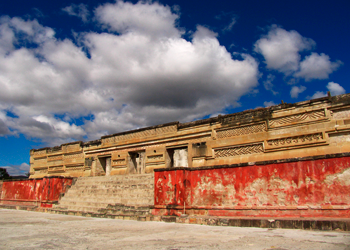 Is the second most important archeological site in the state of Oaxaca in Mexico. The site is located 44 km from the city of Oaxaca.[2] in the upper end of the Tlacolula Valley, one of the three that form the Central Valleys Region of the state. While Monte Albán was most important as the political center, Mitla was the main religious center. The name Mitla is derived from the Nahuatl name Mictlán, which was the place of the dead or underworld. Its Zapotec name is Lyobaa, which means “place of rest.” The name Mictlán was Hispanicized to Mitla by the Spanish.However, what makes Mitla unique among Mesoamerican sites is the elaborate and intricate mosaic fretwork and geometric designs that cover tombs, panels, friezes and even entire walls. These mosaics are made with small, finely cut and polished stone pieces which have been fitted together without the use of mortar. No other site in Mexico has this. 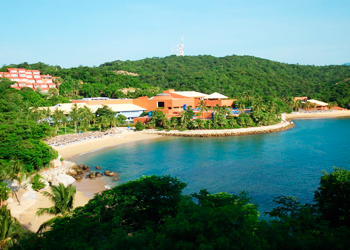 Is a tourist development in Mexico. It is located on the Pacific coast in the state of Oaxaca. Huatulco’s tourism industry is centered on its nine bays thus the name Bahias de Huatulco but has since been unofficially shortened to simply Huatulco. Huatulco has a wide variety of accommodations from rooms for rent, small economy hotels, luxury villas, vacation condominiums, bed and breakfasts, as well as several luxury resorts standing on or near the shores of Tangolunda Bay. The Camino Real Zaashila, Quinta Real Huatulco, Las Brisas, Dreams Resort & Spa (Formerly the Gala hotel) and the Barceló are examples of the most popular larger resorts in the area.
Huatulco is located in the state of Oaxaca where the foothills of the Sierra Madre del Sur Mountains meet the Pacific Ocean approximately 500 km south of Acapulco, Guerrero. 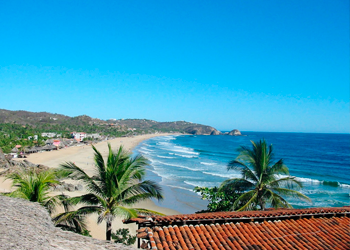 The beautiful 1.5km stretch of pale sand called Zipolite, beginning about 2.5km west of Puerto Ángel, moves at a slow pace, withering in the midday heat. This coast’s original budget beach bum magnet, it attracts an international class of sun lovers, shirtless yoga gurus and surfers to its wonderfully elemental surroundings of crashing surf, pounding sun, rocky headlands and tall palapa roofs. While there are still plenty of reassuringly rustic budget lodgings and an unmistakable hippie vibe, a number of more comfortable lodgings and classier restaurants at the west end of the village cater to a midrange clientele who also love the Zipolite ambience. There’s a certain magic here, and you may postpone departure more than once.

Zipolite has a certain overstated fame as a nudist beach. Total nudity is common only at the western end of the beach and in the small cove called Playa del Amor at the east end, and even there it may meet the raised eyebrows of locals. 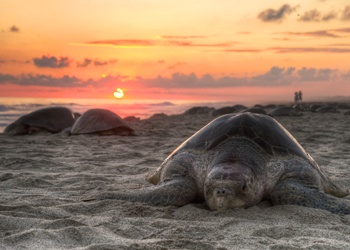 A kilometer west of San Agustinillo, Mazunte has a fine, curving, sandy beach on a scenic bay, an interesting turtle center, and a good variety of basic and fancier places to stay and eat. The village is well known as a travelers’ hangout and has a number of foreign residents, attracted by the area’s beauty and laid-back atmosphere. There’s something of hippie vibe. Mazunte’s economic mainstays used to be turtle meat and eggs: after the turtle industry was banned in 1990, it turned to ecotourism.

The main road running through the middle of Mazunte is called Paseo del Mazunte. Four lanes run about 500m from the road to the beach: in east-to-west order they are Andador Golfina, Andador Carey, Andador La Barrita and Calle Rinconcito – this last leading down to the part of the beach called El Rinconcito, which is the best bit for swimming. The cape Punta Cometa closes off the west end of the bay. A rough track off Calle Rinconcito heads 750m west to Playa Mermejita, a beautiful long, wild beach with a handful of attractive accommodations, some scaling its jungly slopes – unfortunately, tricky currents and strong waves make swimming inadvisable. 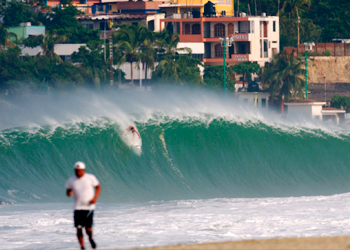 Is a small port and tourist center in the municipality of San Pedro Mixtepec Distrito 22 in the Mexican state of Oaxaca. Prior to the 1930s, there was no town. The name “Puerto Escondido” had roots in the legend of a woman who escaped her captors and hid here. The Nahuatl word for this area was Zicatela, meaning “place of large thorns”.Today, it refers to the area’s most famous beach.
Puerto Escondido is one of the most important tourist attractions on the Oaxacan coast. It caters to a more downscale and eclectic clientele than neighboring Huatulco, mostly surfers, backpackers and Mexican families. The main attractions are the beaches: Zicatela Beach hosts major surfing competitions, while other beaches have gentle waves. West from the town is a large lagoon area popular for fishing and birdwatching.